Our agent said, "You'll never sell this to a normal family." He meant people with kids.

Careless phrasing aside, he was likely right. The house is a bungalow with a finished second floor, one master suite upstairs and another down, a den on each level. Perfect for the childfree gay couple we bought it from. Perfect, after years of sweat and labor, for us.

10 years later people are buying up houses in our neighborhood sight-unseen and we are trying to wedge our now-normal family into our formerly-perfect-for-us bungalow. When we bought this place, we didn't even want kids. Then, when it was finished, we did. But about the labor. Our charming house, in 2006, wasn't just unsellable to normal people; it was unlivable. Boards on the windows. Warped flooring and carpet sticky with what we would realize later, when the neighbors casually mentioned our predecessors' seven dogs, was piss. The best of it (not good) was the un-updated 1960s kitchen. The worst was... OK, the dog piss. In between: A hole in the wall to the attic from which hot air blew nonstop, like a giant hairdryer. A tiny area of marble mosaic floor we called the Hilton lobby. "Fuck You, Wildcats" spray-painted on the back fence. A mysteriously-placed basement puddle that would get worse before it got better. And yet: A yard almost the size of a football field. Mahogany pocket doors. A flowerbed full of poppies next to the driveway.

Our first showing was on Good Friday. The house had been empty for a year-and-a-half. The sellers had repainted only the portion of the exterior that showed in the realtor's photos. They had ripped out the first-floor carpet, but left the staples around the edges and the hardwood underneath unfinished. A worrisome, warm, damp smell turned out to be the aforementioned piss. The interior paint job was ridiculous. But I felt at home almost immediately. I could see, room by room, what the house was meant to be. Later that day, as we talked it through, golf-ball sized hail shot from the sky. I believe in omens. Was this one? We couldn't tell.

We imagined ourselves rescuing the house, returning it to some unknown and unknowable former glory. We stripped every floor and painted every wall. We sanded 80-year-old woodwork for nine straight days, until our hands vibrated and went numb and useless. I cut that sticky carpet and pad — 700 square feet of it — into strips, rolled them up, and threw them out a window onto the creaky deck below where my husband waited to collect them and pile them in a dumpster. It was June in Indiana, humid as a jock strap, raining without warning. After seven mostly miserable weeks, we moved partway in. By October, we had added a big, cozy master bath and walk-in closet upstairs. We each had a study in which to write. We had an enormous dining room at the center of the house where we would feed ourselves and our friends.

When people talk about remodeling their homes, mostly they mean that they directed traffic among contractors, or that they selected the finished project's features without paying a designer. When I say we did the work, I mostly mean my husband and me. I stood next to the contractor who framed and plumbed the bathroom, hanging drywall while he tiled the floor. The electrician showed me, step-by-step, how to finish installing lights and receptacles so we wouldn't have to pay him to come back. We hiked up a caved-in section of the deck with a car jack to install proper joist hangers. Later, we tiled 300 square feet of kitchen in natural slate, built custom cabinets, tore out completely fucked up wiring and installations and replaced them to code. We poured our own concrete countertops.

This is how you build your life.

Or it is, at least, if you have no familiarity with your own limitations and a deep desire for a place in the world to which nobody else can lay claim. Before this house, I lived only in rentals. In a major city, this doesn't indicate much. In the middle of Indiana, it means you're poor, or disenfranchised, or you can't get your shit together. My upbringing was a sampler platter of all of the above. From farmhand housing to the cheap apartment my single mother could manage (where I slept in a utility room with a working clothes dryer), to my own transient rental history, no place I lived was ever a permanent address. Every floor, wall, patch of grass: property of someone else. Was this a "normal" family?

Kitchen in the midst of remodelling. Image: Victoria Barrett

But this house, even before the labor, was my home. 10 years ago this June, we sat on the collapsing back deck after closing, the keys in our hands, and I looked out at the massive back yard and cried from joy. It was filthy, unfit for habitation, mine. It turned out to be my best investment, too: the post-remodel appraisal reflected a 60 percent increase in value, an increase that is undoubtedly much larger now that area real estate has caught fire. But I couldn't have cared less about equity, or a "normal" family — the thought of anyone else living in my house made my bones ache.

Read more: How to Melt Your Bathtub Without Really Trying

Who are those people, anyway? The "normal" families? What do their houses look like? 2,500 square feet and four or more bedrooms, according to the Census Bureau. The kind of dwellings I would walk past on my way home from school as a kid, winding through good neighborhoods to the shithole where we lived — a shithole that, a few years ago, was busted as a meth lab — looking up at manicured porches, awe and longing undisguised on my open face. This isn't exactly what our real estate agent meant, of course. He meant people who need multiple bedrooms on the same level. Which we now do.

The me who bought and remodeled this house would be startled to see me, now, parenting a toddler and a newborn. But here I am, wiping baby puke off my shirt and the newborn's face multiple times a day, panicking that he might wake the toddler during night feedings. The second-floor den is now a nursery. The boys will share it, even though it sits open at the top of the stairs. We stay out of the kitchen during the umpteen hours per day that the toddler sleeps, skip showers to avoid noise in the master suite next to the nursery. Nobody in a Brooklyn apartment would think much about our adaptations. But in theory, at least, we live in Indiana so that we can afford some space.

These ideas about space are a relatively new invention, imagined by our generation, or at least not long before us. Last summer, I was outside when an SUV cruised past twice, scary-slow. Inside was a man who had grown up in our house. His father bought it in 1932, married, had four boys. They grew up close together, the second floor some kind of bunk room. They set the place on fire hosting a poker party in the '60s on a night when their parents were away. They kept chickens in the yard, as some of our more hip neighbors do, gardened as I do now. They poured a concrete pad at the back of the lot and ran electricity for the Eastside's first lighted basketball court. His father put in the second-floor bathroom we tore out and replaced, expanded the kitchen after the fire, installed our creaky staircase. The house's former glory was, in fact, knowable. It never looked nearly as good as it does now. 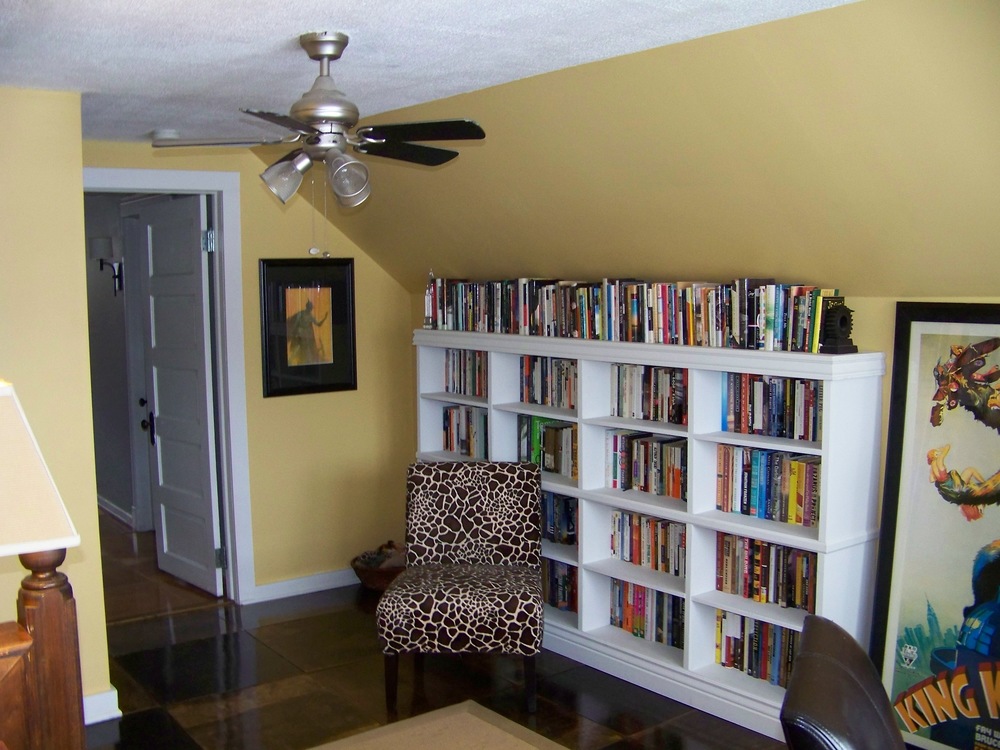 We ended up in this predicament — caring for babies in a house for the childfree — because one day, after all the work, I looked around our house and said, "This would be an awesome place to grow up." Before long, we were talking about it in earnest: What would parenting be like? Would we be any good at it? Which projects, and how many, would having kids necessitate in the house? How much privacy would we all need, and how would we find it in this limited space? How would any of this work?

Read more: Container Gardening for When You Only Kind of Give a Shit

Once the idea entered my head, I obsessed for months over how to keep the cats out of the crib. (My friend M. tells me mothers always worry about the wrong thing. The cats aren't even interested in the cribs.) We spent entire months planning, in excruciating detail, to build a new closet and convert our walk-in to a nursery. We talked for hours, night after night, about when and whether growing boys need their own rooms. And then we did the thing we said we'd never do: We began to look at other houses. This place we had made in our own image began to look small, cramped, flawed. We toured a four-bedroom fixer-upper with a library, a breakfast room, and a finishable attic and came home feeling like the walls were going to collapse on us. I started to pine for a mudroom, a laundry room, a craft room. My husband made plans for a study three times the size of the one he has now. All the trappings of a four-bedroom in the suburbs.

But this time around, I am 42, not 32, and I have two little kids. I think that remaking a whole house in your own image may be a younger person's game. Everything we love about our house we could recreate in another structure, but when I think about doing it, all I feel is tired — no exhilaration, no drive to plan, very few big ideas. Is this middle-age? Parenthood? PPD? Or just the elusive, settled adulthood I never thought I'd reach?

Now that it's begun to look nigh impossible to find a big house to fix up in this neighborhood we love, I've mostly stopped staring longingly at other houses, and have begun again looking with love at my own. It's cluttered with baby gear and discarded socks and the gardens all need weeks of weeding and the floors all need to be mopped, but it is still mine. Its big dumb abnormal heart still shines right out at you, there on the sidewalk. You, the one who slowed down out front, who glanced surreptitiously up with admiration and maybe a little bit of longing. Victoria Barrett's fiction and nonfiction have appeared in Glimmer Train, Salon, PANK, and other outlets. She lives and writes in a house full of men and boys (even the pets) and tries not to feel too bad about it.