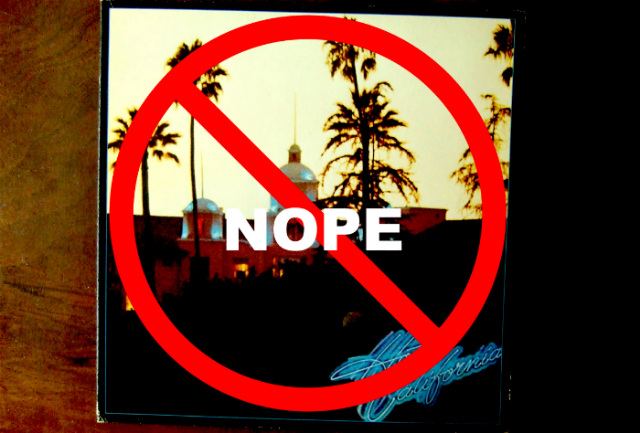 I can always tell when I'm going to have a very, very bad day.

My darling husband has our Sonos player set to go off at 5 a.m., with a radio alarm. This is usually okay with me; I enjoy waking up to music, and it sure as hell beats hearing a phone alarm.

And topping that list is "Hotel California" by the Eagles.

Now before you go getting your Glenn Frey panties in a bunch, I realize that "Hotel California" reached the number one spot on the Billboard Hot 100. I know that it has gold status and has been sold a few million times and digitally downloaded like a gazillion times. I know that many established rock critics and media outlets refer to it as one of the greatest songs of all time and it won a Grammy and all kinds of guitar people say it has one of the greatest solos of all time and blah blah blah.

I still despise this song.

According to Wikipedia, Henley said that the song was meant to be "more of a symbolic piece about America in general. Lyrically, the song deals with traditional or classical themes of conflict: darkness and light, good and evil, youth and age, the spiritual versus the secular. I guess you could say it's a song about loss of innocence."

It's also a song about the loss of my temper when I hear it on the G-damn radio at 5 a.m. Why do I hate this song so much? Here are three reasons:

1: I hate Don Henley's voice on this song. OK, sure, I'm not a huge Henley fan to begin with, but I hate his enunciation here, especially because he uses this sort of bizarre Jamaican accent at certain parts. Henley even said at one point this song was called "Mexican Reggae," and he sort of mimics what he thinks Jamaicans sound like and it makes my skin crawl.

2: The lyrics. Glenn Frey said this song is about a weary traveler who is "quickly spooked by the claustrophobic feeling of being caught in a disturbing web from which he may never escape." Which is exactly how I feel when I hear "Hotel California," because the damn song never ends. It clocks in at 6:30 — that's about six minutes longer than it should be. If "Hotel California" symbolizes a web in which a traveler can never escape, to me it symbolizes the following: waking up at 5 a.m. and having to work, being stuck in an extremely long grocery checkout line when I only have three items and the jerk in front of me has an overflowing shopping cart, sitting in the sick section of the waiting room at my kid's pediatrician when my kid is projectile vomiting and the Muzak version of this song is playing, waiting at the DMV, getting a root canal. This is the disturbing web "Hotel California" traps me in.

3: Don Henley sounds like a major d-bag. Also from Wikipedia:
In a 2009 interview, The [Cleveland] Plain Dealer music critic John Soeder asked Don Henley if he regretted writing the lines, "So I called up the captain / 'Please bring me my wine' / He said, 'We haven't had that spirit here since 1969'" because wine is fermented while spirits are distilled.

Henley responded:
Thanks for the tutorial and, no, you're not the first to bring this to my attention — and you're not the first to completely misinterpret the lyric and miss the metaphor. Believe me, I've consumed enough alcoholic beverages in my time to know how they are made and what the proper nomenclature is. But that line in the song has little or nothing to do with alcoholic beverages. It's a sociopolitical statement. My only regret would be having to explain it in detail to you, which would defeat the purpose of using literary devices in songwriting and lower the discussion to some silly and irrelevant argument about chemical processes.

Thanks for the tutorial wah wah wah, I know wine wah wah, you missed my metaphor because your tiny little brain can't handle it. That's basically what Henley is saying here. In reality, he just wanted something to rhyme with "1969," so he chose "wine."

Eve Vawter is the EIC of Maximum Middle Age. She has written extensively for both print and internet. She recently finished her first novel about ghosts who drink Starbucks and care a lot about Beyoncé and she lives with her beloved husband, kids, and cats somewhere in Kentucky.