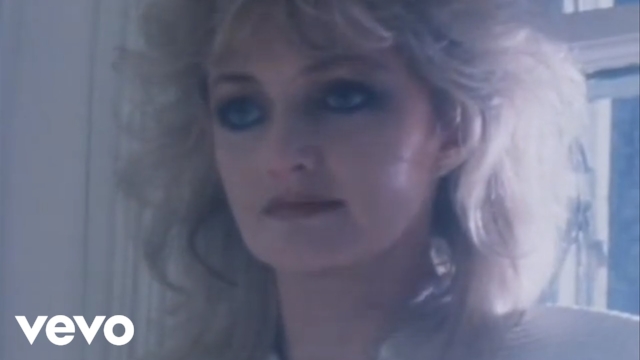 Every now and then I get a little bit nervous that the best of all the years have gone by... — "Total Eclipse of the Heart"

That's the lyric that gets you from 1983's chart-destroying hit performed by Bonnie Tyler and written and produced by Jim Steinman. That lyric basically and magnificently sums up every single fear that everyone has about growing older and aging: Nothing will ever be as good as it once was, and the best of your years have already passed. This song, at its peak, sold 60,000 copies per day.

It's a gorgeous song, grand instrumentation, legendary lyrics and Tyler's gritty vocals that tell the epic love story of a turbulent relationship — once described by Jim Beviglia as an emotionally exhausting ballad. It's also scary like whoa.

If you ever felt this jam was the lady version of Meatloaf's Paradise By The Dashboard Light you wouldn't be far off. Steinman wrote and produced both songs and they share the same qualities, lush orchestration, soaring vocals, and both tell the story of a relationship with all of its highs and lows. No kids, they don't write songs like this anymore. I mean, think about this lyric:

Every now and then I know you'll never be the boy you always wanted to be...

I mean, really think about it. It's basically saying: Listen, I may fall apart every now and then, but you buddy, the best of your years have passed you by too and life didn't turn out exactly how you wanted it. Plus, we argue a lot so we're basically living in a powder keg and giving off sparks. It doesn't get more grandiose and epic than that. I get that this song is easy fodder to make fun of, especially the music video, but for me that still doesn't detract from how haunting and bitter the song actually is. It always made me feel terribly sad when I heard it.

Read more: The Songs from 1987 I Will Never Stop Rocking Out To

According to Wikipedia, Steinman was quoted from Playbilt as saying:

I was trying to come up with a love song and I remembered I actually wrote that to be a vampire love song. Its original title was "Vampires in Love" because I was working on a musical of Nosferatu, the other great vampire story. If anyone listens to the lyrics, they're really like vampire lines. It's all about the darkness, the power of darkness and love's place in dark..

I can totally see it as a vampire love song. It's a total bummer and so is living forever and having to feed off your lovers to survive.

So how do you feel about this song? Love it? Hate it? Or does it make you feel sad and lonely like it does me?